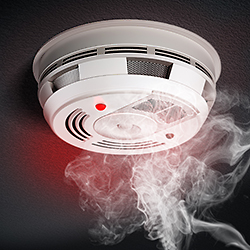 OK, this is embarrassing!

Dumb Smoke Alarm Recalled Because It Can’t Even Detect Smoke

Gizmodo – By: Adam Clark Estes – “If you own a Kidde smoke detector, you might want to inspect it. The company just issued a recall on nearly 500,000 smoke detectors that, sadly, did not detect smoke. The Kidde PI2010 and the Kidde PI9010 are the models affected by the recall.

So check out your own situation. If your smoke detector is called Kidde and it also has this yellow part, you might be in trouble. CPSC recommends you contact Kidde, which can provide you with a replacement alarm that isn’t worthless.”