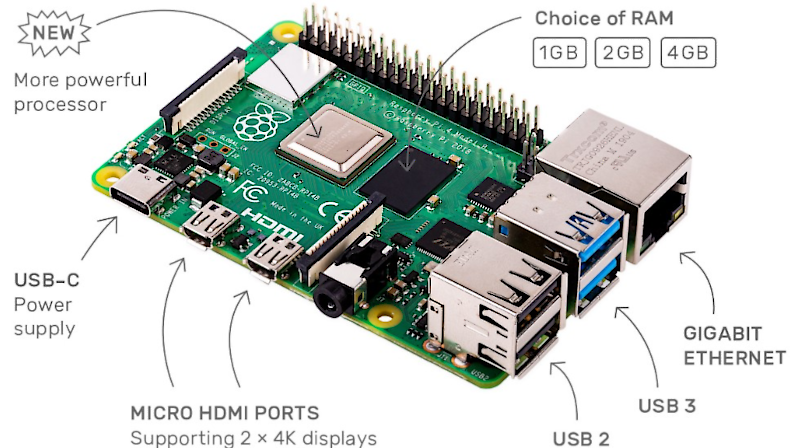 The New Raspberry Pi Is Basically a $35 Desktop Computer

Gizmodo – By: Andrew Liszewski “It’s rare to come across a bespoke gadget or a cleverly hacked device that doesn’t have a tiny Raspberry Pi inside it. It’s long been one of the easiest and cheapest ways to power a custom creation, but the new Raspberry Pi, announced earlier today, packs significant upgrades that could let it finally pass as an incredibly cheap desktop computer.

That’s not to say you should be kicking yourself for spending $1,000+ on a new desktop workstation. At $35, the new Raspberry Pi 4 is the last thing you’ll want to rely on for tasks like Photoshop, video editing, or gaming. But it’s now packing a Broadcom 1.5 GHz ARM Cortex-A72 quad-core processor and the option to step up from 1GB of faster LPDDR4 RAM to 2GB for $45, or 4GB for $55, which should go a long way to making the Pi 4 more viable as a web browsing and email machine straight out of the box.

The Raspberry Pi 3’s standard sized HDMI port has been upgraded to a pair of micro HDMI ports on the Pi 4, allowing the tiny computer to power a pair of 4K displays at 30 frames per second, or a single 4K display at 60 frames per second—thanks to the board now adopting developer Eric Anholt’s Mesa V3D graphics driver. Onboard you’ll also find a pair of USB 2.0 ports and a pair of USB 3.0 ports, but microUSB is nowhere to be seen. It’s been replaced with a power-only USB-C port, adding an extra 500 mA of juice. On the wireless front, the Raspberry Pi 4’s Bluetooth has been upgraded to the 5.0 standard, and wifi now supports dual-band 802.11ac.

Originally designed as both a tool for tinkerers and those wanting to learn more about how computers work, the Raspberry Pi has become an essential tool for industrial applications, according to the company. The latest iteration of the hardware has many upgrades that have come at the request of business customers specifically, including improved I/O speeds across the board. But in an interview with the Next Web, Raspberry Pi founder Eben Upton promises that education is still part of the company’s focus. ‘While our sales into education are smaller than into industry, we still estimate we sold over 1 million units into that market in 2018 alone,’ he claimed. Upton also believes, ‘What’s changed with Raspberry Pi 4 is that in addition to being a device for learning about computing, it’s also much more suitable than its predecessors for use as a general-purpose classroom computer.’

To that end, the Raspberry Pi 4 will also include some welcome operating system upgrades that will be based on the upcoming release of Debian 10 Buster. The polished UI should be less intimidating to those already familiar with commercial OS products like Windows and MacOS, and that also goes for the included applications like the Chrome 74 web browser.

As the brains powering your next highly customized smart home upgrade, the Raspberry Pi 4 seems like an easy choice. It remains to be seen, however, how viable the hardware will be as a basic desktop machine (will it be able to run Windows 10 S like other barebones systems?), but the updated specs seem to indicate that the Pi might have finally graduated from being a tool for just hackers, hobbyists, and tinkerers.”