A Geek Software of the Week “Twofer!!”

Eraser is Free software and its source code is released under GNU General Public License.

WHY USE ERASER?
Most people have some data that they would rather not share with others – passwords, personal information, classified documents from work, financial records, self-written poems, the list continues.

Perhaps you have saved some of this information on your computer where it is conveniently at your reach, but when the time comes to remove the data from your hard disk, things get a bit more complicated and maintaining your privacy is not as simple as it may have seemed at first.

Your first thought may be that when you ‘delete’ the file, the data is gone. Not quite, when you delete a file, the operating system does not really remove the file from the disk; it only removes the reference of the file from the file system table. The file remains on the disk until another file is created over it, and even after that, it might be possible to recover data by studying the magnetic fields on the disk platter surface.

Before the file is overwritten, anyone can easily retrieve it with a disk maintenance or an undelete utility. 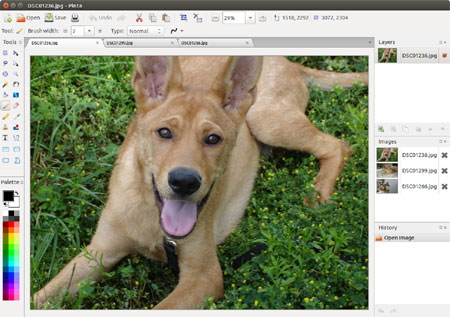 Pinta is a free, open source program for drawing and image editing.

Its goal is to provide users with a simple yet powerful way to draw and manipulate images on Linux, Mac, Windows, and *BSD.

Multilingual
Use Pinta in your language. Pinta is at least partially translated into over 55 languages.

Full History
Don’t be afraid to experiment, Pinta tracks your full history so you can always undo.

Multiple Layers
Use layers to help separate and group elements of your image for easy editing.