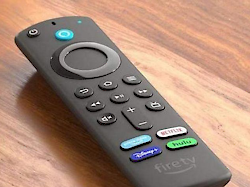 My second FireTV died, like the first one, so I won’t be getting one. But, it looks like they are copying Roku’s use of providing “services” their own buttons, for a “kick-back,” I’m sure!

Other than the dedicated streaming service buttons, the other major change is a blue Alexa button at the top of the remote. This button replaces the back microphone button for using voice commands. Another slight difference is the Fire TV logo at the bottom of the remote.

The remote was unveiled Wednesday and will start shipping on Wednesday, April 14. You can preorder the remote now on Amazon for $29.99.

The new model will be compatible with the following devices:

It will not be compatible with 1st and 2nd gen Fire TV, 1st gen Fire TV Stick, or Fire TV Edition smart TVs.”