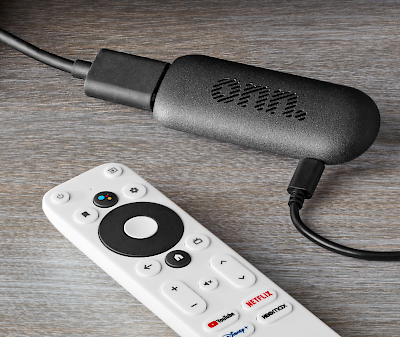 9to5 Google – By: Ben Schoon – “Up until this past year, Google’s Android TV has lacked the cheap hardware that pushed competitors like Roku and Fire TV to the masses. Now, Walmart is looking to wage a war on price by debuting an ultra-cheap $25 Android TV streaming stick.

Over the past day, a listing has gone up on Walmart’s website for the “onn FHD Streaming Stick,” an Android TV-powered streamer that costs just $24.88. That’s the lowest cost Android TV device set to be sold in the United States ever. News of the price comes from @AndroidTV_Rumor, who was able to capture a screenshot of the price, something we can’t see on the same listing.

This is the same device we reported on earlier this year when it passed through the FCC.

How is Walmart able to hit such a low cost? We don’t have specifics at this point given the product still hasn’t been officially announced. However, we do get a hint of where costs have been cut in the specs the listing does provide. 1GB of RAM is specifically mentioned, a total that’s pretty much the bottom of the barrel for Android TV devices. It’s something we speculated could be the cause of inconsistent performance on the Xiaomi Mi TV Stick last year. The device also drops down to 1080p streaming only, which hints at a less costly chipset too.

Walmart directly mentions that its Android TV stick supports Netflix but makes no direct mention of Prime Video. Disney+ and HBO Max are also mentioned on the remote. That remote, notably, is the same G10 design that Google commissioned for Android TV devices this year.

A release date for this product isn’t mentioned, but it’s probably safe to assume it’ll arrive around the same time as the $30 4K streamer we’ve seen from Walmart a few times at this point. With such affordable prices, it’s clear the retailer is aiming to make a major play against the likes of Roku this year.

I’ve been using the 4K option from Walmart’s lineup for the past few days and, frankly, I’ve been rather happy with it so far. For being so inexpensive I fully expected the experience to suffer considerably. However, I’ve only been happy with just about everything so far. Overall performance is solid, to say the least, with apps generally feeling snappy and the Android TV homescreen running just as good as any other box/stick I’ve used. It’s easily on par if not better than the Chromecast with Google TV in that aspect.

The highlight has been the remote, of course. This is the first use of the Google-designed G10 remote in the mass market, and it’s a very, very good design. It takes just about everything that was good about the remote included with the new Chromecast — the IR blaster, the input button, the clicky buttons, etc. — and makes it more comfortable with a longer, slightly flatter design.

It’s not all good news, though. I have run into a few bugs that I’d consider more than minor. The remote has had disconnection issues on multiple occasions, specifically with the streaming box disconnecting from the remote. This left me unable to control the box at all, with a reboot being the only solution, a pain when the box was mounted behind my wall-mounted TV. On another occasion, HBO Max seemingly crashed the device, but that issue only cropped up once.

Overall, I’m very satisfied with what Walmart is bringing to the table. It’s a snappy, capable box that delivers Android TV without any major compromises. At just $30, it’s a tremendous value and is basically an impulse buy when you need a streamer. Is it worth it over the Chromecast at just $20 less? I think there’s an argument to be made, but I’ll have more to say about that in a full review soon.”