Our local VMware User’s Group Meeting, find one near YOU! Geek Culture: Where has the Ninja been for two years? Howto on watching netcasts via your HD TV! Using Miro, Geek Software of the Week: Miro Video Converter, the Tech News!

Get the Miro Player 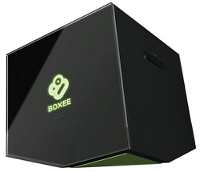 I have Vudu on my Visio Blu-Ray Player at home. It is pretty cool! In fact, my Player came with $15.00 in free rentals, which I have to use before the end of this month! So, I had better get busy this weekend and watch some stuff! Anyway, the Boxee Box looks cool… but, I am leaning toward the Roku box… more on that when I finally get one, or the other! The bottom line is, the future is Streaming Video on the Internet (IPTV!) You have heard it here on the Doctor’s Blog for years!

“Streaming video on demand service Vudu will be available on all forms of Boxee in November, the company announced Thursday. This partnership will put a Vudu client on both the D-Link Boxee Box and the Boxee media center software for PC and Mac.

The service offers 480p, 720p, and 1080p HD movie rentals, and gets many movies in conjunction with their DVD launch. Though the service first launched as a standalone set top box back in 2007, it eventually became a video solution embedded in TVs and connected Blu-ray players.

Vudu’s shift to being an embedded service looks to have been timed perfectly, and it is now available on products from LG, Mitsubishi, Samsung, Sanyo, Sharp, Toshiba and Vizio. In early 2010, Vudu was acquired by Wal-Mart, cementing its place in the burgeoning for-pay video streaming market alongside Netflix, Apple, Amazon, and Blockbuster.

Now, with a place in the Boxee Box, Vudu finds itself again in the right place at the right time. Set top boxes that stream content ‘over the top’ (OTT) of an internet connection are hot items right now, and Boxee will be competing with Google TV and the Logitech Revue set top box, Apple’s newly redesigned AppleTV, and Roku’s streaming media player, now sold in retail through Netgear.”

Ubuntu Linux to Default to the New Unity Interface 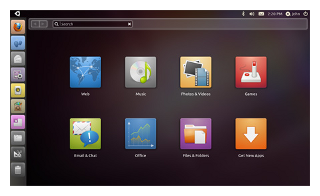 So, there has long been a “fuss” among Linux wonks about “KDE?” or “Gnome?” Well, Canonical (makers of Ubuntu) say, “Unity!” The new Unity interface is built on Gnome, but it is different! Interesting choice, Canonical!

“The ‘Unity’ user interface that debuted in Ubuntu 10.10’s Netbook Edition will be standard on the next version of the Ubuntu Desktop Edition as well. Ubuntu Desktop 11.04 will replace the Linux distribution’s default GNOME desktop environment in favor of the multitouch-enabled Unity interface, says Ubuntu sponsor Canonical.

Making the announcement at a keynote Oct. 25 at Ubuntu Developer Summit in Orlando, Fla., Mark Shuttleworth, Canonical’s founder, said Ubuntu Desktop 11.04 will swap out the GNOME user interface in favor of the Unity interface that is now available on the Ubuntu Netbook Edition (UNE).
‘We conceived some work a time ago focused on netbooks that we want to bring to desktops,’ Shuttleworth said. 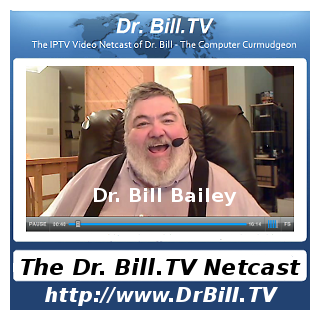 I have finished an “upfit,” and “re-branding,” of the Dr. Bill.TV web site! It is the new “go to” place for Dr. Bill -The Computer Curmudgeon videos! It would be REALLY great if you would consider subscribing to this feed for the new, re-launched show! If you go to the site, you will see lot’s of ways to subscribe at the bottom of the main page. Enjoy the geekiness!

More stuff coming soon on the next Netcast! Stay tuned!

Also, feel free to “spam” your friends with email about how strange, silly, and high tech weird the Dr. Bill Show is!

Limewire has been shutdown. And, I must admit, I am not disturbed by that. I have cleaned up tons o’ PCs of my friends that, after using Limewire, became severely infected from bogus crapware that came through Limewire! After a four-year legal battle… they have been ordered to close up shop.

“After an arduous four years in and out of the courtroom, battling the RIAA over copyright infringement accusations, peer to peer file sharing service Limewire has finally been shut down. The RIAA’s suit against Limewire was part of a sweeping initiative to curb the trade of copyrighted materials on peer-to-peer networks. In 2005, the group sent cease and desist letters to the owners of major p2p services including Kazaa, WinMX, i2Hub, eDonkey, BearShare, and LimeWire. The orders demanded the services ‘immediately cease-and-desist from enabling and inducing the infringement of RIAA member sound recordings,’ but gave the services the option to discuss ‘pre-litigation resolutions.’ Most services complied, such as Kazaa, which offered a $115 million settlement. The RIAA eventually had to haul Limewire into court. ‘Despite numerous efforts to engage LimeWire, the site’s corporate owners have shown insufficient interest in developing a legal business model that adequately respects copyrights,’ the RIAA said at the time. After a protracted court battle, US District Court Judge Kimba Wood handed down her summary judgement in favor of the RIAA last May. As it turned out, the RIAA’s legal team presented Limewire’s ‘smoking gun’ in court back in 2008: e-mail communications that showed the service was built with the illegality of file sharing taken fully into account. Today, the service was shut down.”

So, it is always a hassle to convert video from one format or another! I use (and love) the Free Video Converter, from Koyotesoft, available here:

BUT… our good friends at Participatory Culture (the folks behind Miro) also have a free video converter… it is free, AND Open Source… gotta love that! It is available here:

“A super simple way to convert almost any video to MP4, WebM (vp8), Ogg Theora, or for Android, iPhone, and more. 100% Free and open-source. Miro Video Converter has presets that will convert video to the correct sizes and formats for popular phones, iPods, and other media players. Just convert your video and copy it to your device.”

It is designed mainly for folks that download video and then want to convert it to run on a hand-held device, like your iPhone, Droid phone, etc. Good stuff!

The “The Doctor Has a Coughing Fit Edition” of Dr. Bill Netcast #161!

Steve Jobs… worried? Yet Apple way ahead profit-wise! A Geek Project – The JW Player! The Doctor has a coughing fit! Geek Culture with Jonathan Coulton! And much more!

Links that pertain to this Geek Project:

This sounds like it will be a cool, new technology when we have it in our hands! Cool!

“Wi-Fi Direct certification has begun. The Wi-Fi Alliance announced today that products from Atheros, Broadcom, Intel, Ralink, Realtek, and Cisco will be the first Certified Wi-Fi Direct hardware in the test bed for the new wireless networking standard.

The key feature of the new Wi-Fi Direct standard is that it lets devices with 802.11 wireless radios communicate directly with one another without the need of a wireless router between them. Wi-Fi Direct devices near one another can transfer content at speeds 25 times faster than they could with Bluetooth 2.0. As a result, the standard has been referred to as a Bluetooth Killer in IEEE meetings.

‘We designed Wi-Fi Direct to unleash a wide variety of applications which require device connections, but do not need the internet or even a traditional network,’ said Edgar Figueroa, CEO of the Wi-Fi Alliance. ‘Wi-Fi Direct empowers users to connect devices – when, where and how they want to, and our certification program delivers products that work well together, regardless of the brand.'”

A SPECIAL EDITION Netcast showing how to install Ubuntu – Netbook Edition 10.10! Dr. Bill uses VMware Workstation 7.1 to allow us to install Ubuntu 10.10 Netbook Edition – and uses BB Flashback Express to record the process for the Netcast. BE SURE TO STAY TUNED for our REGULAR Netcast, which will be released tomorrow! (LATE ADDDITION: Due to scheduling issues over the weekend…. looks like it will be Monday evening before I can get the next (regular) show out… but, hey, only late by a day!)

Links that pertain to this Geek Project:

I have highlighted the awesome JW Player for flash as a “Geek Software of the Week” before, and it rocks! But, with the re-launch of the “Dr. Bill – The Computer Curmudgeon” show, I decided to “go all out” and purchase a full copy of the player from Longtail Video (Jeroen “JW” Wijering’s brainchild) and go for it! I had used the “freebie” player before, and was very impressed, but, since one day, if the stars align, I hope to make a little spending money from the show (we can only hope!) … legally (and you guys know, the Doctor is all about the legal!) I had to purchase the full version.

I must say, it rocks! Since I am using WordPress to power the web site (on my server) and since I am using Viper’s Video Quicktags plugin for WordPress, it was a simple matter to download the full player after my purchase, and replace the files (after renaming the old ones) in the correct sub-directory. In this case:

with the ones from the paid-for full version of the JW Player. Then, go into the WordPress Plugin control panel for Viper’s Video Quicktags and add your cool options, to the line:

“Advanced Parameters” (at the bottom of the control panel screen)

And, bazinga! You have the cool feature of briefly flashing your own logo, rather than the JW Player logo! Of course, the new latest version of the JW Player does much more than this… in fact, it now supports Flash, HTML5, and many, many other formats! By the way, you can create your own transparent logo, by using The GIMP, setting your background to “transparency” then saving in as a PNG file (Portable Network Graphic). PNG is an open source image format that supports transparency, so I use it for everything! And, it is quite compact! Here are some neat links used in this project: